The Euro DBA conference was recently held in Freiburg Germany. Here is a summary written by Martin Winter:

The meeting represented an opportunity to share experiences of living with DBA, understand developments in research and working towards greater global collaboration in our efforts to find a cure…..

After a long journey for many, we checked into the Hotel Stadt and made our way to the seminar rooms at the University Children’s Hospital. The patient representatives were tasked with giving an overview of their respective countries support group. (Number of patients supported/ structure of support groups/challenges etc).

We had a very constructive discussion, however, there are a number of common themes that still need to be addressed:

We agreed the following:

After dinner at a local restaurant, we headed back to our hotel for some much need rest. We needed to register the next day by 7:45am!

In the morning, we were escorted to the auditorium within the University Medical Centre. Registration followed and we sat down to listen to the welcome address/introductions by Marcin Wlodarski (Germany) and Martin Winter (DBAUK)

The next 8 hours (we did stop briefly for lunch/coffee!) focused on:

The final presentation was probably the most relevant to the EuroDBA patient reps community. Sergey Doulatov (Washington) and Colin Stieff (Harvard) gave an overview of their respective models used (knockout mouse/patient iPS cells (Sigmura et al) and Johan Flygare/Ross Hannan gave an overview of the identification and screening of novel drugs.

A number of potentially effective compounds/drugs that may lead to a cure include SMER 28 and Dexamethasone.

At 4:30pm we left the conference centre to visit a local vineyard in Schallstadt. This gave us an opportunity to discuss DBA in further depth over a glass (or two) of Germany’s finest offering.

A slightly later start (8:45am) kicked off with an overview of hematopoietic stem cell transplantation experiences and data from France, Germany, Brazil, USA, Austria and the UK.

It was widely accepted that the higher risks associated with non-sibling (vs sibling) HSC transplants have significantly diminished. Drug conditioning/regimes also differ between countries; Dr Josu De La Fuente shared some interesting data re reducing the levels of conditioning drugs (and toxicity as a result) and inclusion of T-cells to promote the patients immune system.  Other data that maybe of interest included the DBAR registry (US); out of 761 patients enrolled, 101 patients had undergone SCT with a median age of 8.

Session 2 focused on Iron Chelation, with presentations by Italy, Greece and France.

There remain 2 primary iron chelation drugs – Exjade (Deferasirox) and Deferoxamine (Desferal). Thierry LeBlamc from France shared some data re the effectiveness of the drugs if used together. He also stated Ferriprox could be used as an alternative chelator for adults if properly managed (neutropenia risk).

Post an extended lunch at the local farmers market, we listened to presentations on steroids from Germany, Sweden and the US.

More research has been undertaken with respect to how steroids work targeting the BFU-E stage of red blood cell production and prevention of p53 activation. (Flygare/Narla)

Other discussions included the development of target steroid therapy rather than the systemic medication currently used (Prednisolone). (J Flygare/Narla – Glucocorticoids).

Session 4 focused on gene therapy with presentations from Germany, Sweden and Spain. Stefan Karlson stated gene therapy would provide a solution to patients in 2-3 years (RPS19). This has already been undertaken for patients with Fanconi Anaemia. CDK8/19 inhibitors were also sighted as a candidate for DBA (Patent pending).

The final presentation by Adrianna Vlachos (NY) provided an update on the clinical trials for L-Leucine, Trifluoperazine, SMER 28 and Sotatercept.

Result: 4 patients responded with 3 categorised as having a complete response (maintaining Hb over 90)

Next steps: Analysing of data including weight (gain), retic counts. Future study will be based on a higher dose of Leucine.

8 patients completed 4 cycles each with no response initially, however, a good response has been seen with MDS and thalassemia patients using a higher dose.

Next steps: The next study has now commenced with a population of 20 patients over a 24 month period. If there is a response, study will be undertaken with Luspatercept (next generation drug without bone side effects)

Trifluoperazine (TFP) – Identified as a chemical screen using zebra fish. TFP is an anti psychotic medication with a well known profile. Maximum duration of study will be 9 weeks with a 6 week post drug observation period.

Next steps: October 2017 – Awaiting board approval (IRB) to proceed with 1st subject. If drug trial is successful then a modified agent will be developed without the neurological side effects.

SMER 28 – rescues erythroid defect in DBA; a second agent is in the pipeline.

The meeting was concluded by Alyson MacInnes with a brief summary from Steve Ellis (DBAF). Should DBA be re-clasified as a syndrome (DBS) as some patients do not have congential anomalies or anaemia?

The majority of participants attended the dinner at the local “schlossle”. On Sunday, after a visit to the Black Forest it was time to return home for a much needed rest!

There is a significant amount of research being undertaken with respect to DBA and progress is being made.

We clearly need to work with Euro DBA to provide funding, support and build global bridges….. 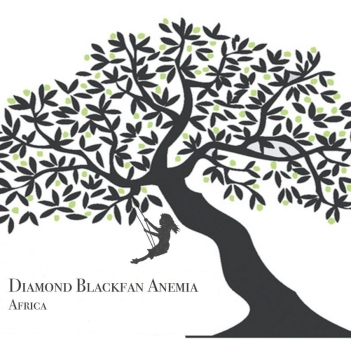 With the Lentivirus having already been used in experimental mouse models with DBA [1], this study in a child with sickle cell disease further highlights the importance of gene therapy research.

Pekka Jaako published an article in 2014 where he used the lentivirus to enforce expression of RPS19 in RPS19 deficient DBA cells which cured the anemia and bone marrow failure.”Our study provides a proof of principle for the development of clinical gene therapy to cure ribosomal protein 19-deficient Diamond-Blackfan anemia” [1].

It is a personal opinion only, but, I do believe that gene therapy is where the cure for DBA lies. Our summarized review on the paper will follow shortly, but in the interim, here is a link to a Medscape article well worth reading. Click Here.

Iron toxicity in transfusion dependent DBA children remains a challenge. Iron overload from repeated transfusions is the leading cause of death in DBA patients when excluding transplant related mortality [1].

Although the trend in  ferritin levels have been used as a guide to detect iron overload, the reliability has been questioned. The study often quoted is that by Kolnagou A [2], who showed that a low serum ferritin level was not sensitive in predicting cardiac iron overload. T2* magnetic resonance imaging (MRI) is currently the gold standard investigation for iron load detection [3]. FerriScan provides an accurate, validated MRI-based measurement of liver iron concentration and is being used by leading experts globally in DBA patients.

In Africa, according to Resonance Health, FerriScan is now available in a number of our countries. 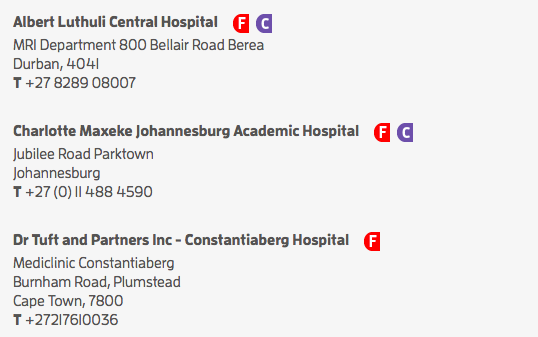 A comprehensive review of the literature with regards to iron overload in DBA will follow shortly.

DBA Africa has been online for 24hours now and we cannot believe the amount of people who have viewed our site. With more that 1500 views on the first day, we hope that this site might be another voice in spreading the word on children living with DBA.

Please continue to share the site and don’t hesitate to send us a message. Hopefully we can continue to spread the word about DBA and slowly begin to make a difference.

If you are from one of our African neighboring countries, please make sure you get hold of us. This site is for you and your child, and we can only try assist if you get in touch with us. To all of you not in Africa, thank you for visiting our page. Please feel free to send us a message and we really hope you visit us regularly.

The initial management principles of DBA are initially to

The use of a co-ordinated multidisciplinary approach to DBA patients cannot be over emphasized. Currently in Africa there is no such facility and thus the DBA Africa foundation aims to assist with co-ordinating and advocating for the establishment of such facilities.

The initial hematopoietic treatment is directed to correcting the anemia. The appropriate use of transfusions is important not only to optimize development of the child but also to prevent accelerated iron overload seen with regular chronic transfusions. Initially, regular blood transfusions with leukodepleted irradiated red blood cells is indicated. The optimal transfusion trigger is unknown, but most authorities use a Hb of 8.0g/dL, with 9.0g/dL during infancy when physiological demands associated with growth a prominent. Usually 10-15ml/kg of leukodepleted irradiated RBC is transfused every 3-5 weeks. Immediate family members should not be used as donors so as to prevent allosensitization which would adversely affect chances of a hematopoietic stem cell transplant (HSCT). Hemoglobin levels should ideally be maintained between 8-12g/dL

The major problem with long term transfusion therapy is iron overload and the toxic effects it presents to essential organs. There is currently no day facility dedicated to the needs of transfusion dependent children. The long-term goal of the Olive Children’s Foundation is to open a children’s transfusion day clinic where the transfusion needs of children can occur under direct doctor vision in a fun and holistic environment.

Approximately 80 percent of patients will initially respond to corticosteroid therapy, with the remaining 20 percent requiring chronic RBC transfusions. Guidelines differ in the literature with regards to the optimal timing of a steroid trial with most authorities suggest a steroid trial at 1 year of age. The adverse effects on linear growth, neurocognitive1 development and side effects of corticosteroids are the main reason for delaying a steroid trial to 1 year of age. Although some authorities suggest a trial at 6 months of age, we recommend deferring until 1 year of age unless a specific indication for an earlier treatment exists.

To promote an erythroid drive, commence steroid treatment 1-2 weeks following a transfusion (Hb ± 9-10g/dL). Many different regimes are described in the literature. We recommend those described by Vlachos et al2.

Prophylaxis whilst on steroid treatment

Pneumocystitis jirovecii pneumonia antibiotic prophylaxis with trimethoprim/sulfamethoxazole should be implemented after the first month of high dose steroids, and should be continued until the patient is on the target low dose alternate day regime. In those with baseline neutropenia, pentamidine is recommended2.

To minimize gastric upset, twice daily steroid dosing together with a proton pump inhibitor such as lansoprazole or H2-blocker such as ranitidine should be used concurrently2.

Vaccinations are generally safe and advocated in DBA patients. Live vaccines should be given unless severely neutropenic or on concurrent high dose steroid treatment. In such cases, live vaccinations should be deferred unless clinically warranted, as in high endemic areas {24}.

On initial diagnosis, ideally a patient should be seen by a cardiologist, urologist and endocrinologist.

The frequency of blood count monitoring is dependent on the patient status and stability. Transfusion dependent patients should have:

All patients should be referred through to endocrinologist by 5 years of age.

The adverse effects of chronic steroid dependency from infancy is specific to DBA patients.